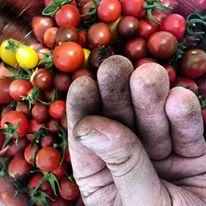 By mid-February 2014, a garden near Morwell, Victoria, was covered by ash from a coal mine fire which started on 9th February, setting the Hazelwood open cut coal mine alight. The coal mine fire ended up burning for weeks, causing serious health effects for local residents and a ‘high probability’ that eleven deaths resulted from the air pollution.

“Police hunt arsonist as the battle to contain the Hazelwood mine fire continues“, ABC News on line, 25.2.14

“I live in Morwell, currently in a disaster situation with the coal mine fire. This is a photo of coal dust and ash affecting my vegetables…very sad and scary”.
Daniel

I am sorry to hear your news.

The worst I’ve had here (in Brisbane) was five pollen laden dust storms meeting bush fire smoke. People had bad allergic reactions in Bayside Brisbane and I lost a lot of produce.

I was reading this story this evening (ABC News on line) shortly before ABC TV also ran a news item on the disaster on the evening news.

When something like this occurs, it’s good to document your observations. Take photos, keep notes of winners and losers for the record.

The Victorian Dept of Health currently advises that air quality has deteriorated dramatically at Morwell in the Latrobe Valley, and “Anyone with concerns about their health should seek medical advice or call nurse-on-call on 1300 60 60 24.”

The Victorian EPA has confirmed the fire is releasing toxic fumes, and residents are leaving.

If you stay, try to stay indoors. Prevent children from playing outside.

Wash fruit carefully to remove all traces of ash. I would discontinue harvesting leafy produce, like lettuce, where it is difficult to flush all parts clean. Produce that has already been picked and is kept indoors, in a cupboard or in a fridge are likely to be least contaminated, as would tinned or packaged produce.

The Total Environment Centre, Dept of Sustainability & Environment and/ or the National Measurement Institute might be able to offer some advice on the chemistry of the situation, and its potential short and long term effects on food plants, beehives, the potability of roof-collected rainwater, fish ponds, dams, grazing land, poultry and other livestock.

The Victorian Health Dept has released this information about rainwater tank safety. It doesn’t mention chemistry, but advises not to drink discoloured, or bad tasting water. They advise people disconnect down pipes from roofs to stop contaminated roof water entering rainwater tanks.

Before you start your car engine, make sure the fan is turned off. Dust/ ash/ fallout can accumulate and the fan will then blow a concentrated amount into your face.

The VDH also has advice on ash fallout. They also have advice on cleaning up indoors.

A vet could better advise, but I would make sure animals have access to clean drinking water and food. The VDH advises that the mains drinking water supply is currently safe to drink. Move animals indoors, in a garage, under a car port, inside a tent, or drape old bedsheets over cages and the mesh front of hutches to limit dust inhalation or ingestion. This is what Icelandic farmers do during volcanic eruptions.

Breathing pores (stomata) of leaves can become blocked by ash and fine particles, and a layer of dust coating leaves can make them lose their sun-hardinesss after a few days. Rinsing foliage with a jet of water helps them photosynthesise and retain their leaf cover.

A soil pH test kit can identify the pH of the ash, which may (or may not) require some soil conditioning once the fire is under control.

You may not be aware, and I don’t expect you to currently be interested to hear, but there is a natural coal seam fire in NSW. At 5,000 years old, the fire at Burning Mountain Nature Reserve is reputed to be the oldest on the planet. It has a more limited release of ash and fumes, allowing plants to survive away from the burn zone.

A community health assessment centre has been established at the Ambulance Victoria Gippsland Regional office at 2 Saskia Way in Morwell, adjacent to the MidValley Shopping Centre, open 8am to 8pm. The centre offers blood pressure, heart rate, temperature and basic respiratory checks. For general health enquiries contact Nurse-On-Call on 1300 60 60 24

Feel free to stay in touch.

USA Report on the toxic effects of coal ash, see ‘Coal Ash, the toxic threat to our health and our environment’, by Physicians for Social Responsibility and Earth justice, Sept 2010;