A student at Dekin Uni is writing about GM foods. She wanted my opinion, so here is my reply – it was published eight years ago in response to an opinion piece written by Jennifer Marohasy (a member of the Institute of Public Affairs, a pro-industry lobby group) in the Courier Mail…The original article, and my reply, are attached as images…

Having read the ‘opinion’ piece by Jennifer Marohasy perhaps you would be interested to print this as the opinion of a botanical horticulturist – someone who has scientific training and practical experience of how plants actually live and reproduce.

“Biodispersal – Another word for the dictionary

Unlike Dr Marohasy (‘Let’s be smart on genetic crops, Courier Mail, 22.11.05), I’ve learned to be cautious about what governments, scientists and businesses say about new technologies.

I well remember British scientists announcing that nuclear power was going to be so cheap, safe and effective that electricity would be supplied free.

So how accurate a technology is GE? How much thought has gone into the consequences of its use?

The history of our previous field experimentation in Australia give us clues as to how these things work. Either the proponents of GE are aware of the dangers and are hiding them, as did the Maralinga nuclear testers, or they are as blissfully ignorant as the introducers of the cane toad.

In the 1950’s and ‘60’s atomic weapons research was the equivalent of GE: cutting edge technology. It was hard to argue for caution without being labelled a commie, a nut, or both.

The Maralinga Tjarutja, then not even Australian citizens, were forced from their traditional land to make way for British nuclear tests: safe, controlled field trials of new technology.

Plutonium 239 loses half of its radioactive strength every 24,000 years. The testers knew that it would be safe for the Maralinga Tjarutja Aboriginal people to reoccupy their homelands after a mere quarter of a million years.

This is NOT true of GE. A few years ago a German biotechnology company genetically engineered a soil bacterium, Klebsiella planticulata, to decompose organic waste and at the same time generate ethanol for use as fuel. Before field trials began this new GE life form was tested in real, living soil in a laboratory.

This was very unusual: normally such tests would be done in sterilised soil. Every single plant that was grown in soil innoculated with the GE Klebsiella died. The new life form affected all the mycorrhizal fungi present in the soil.

These microscopic fungi interact intimately with plant roots assisting plant nutrition and health. Without them soil is practically useless to plants. Critically, had normal tests been completed in sterilised soil no such results would have been seen. Field trials in the natural environment would have followed. A GE life form, capable of making soil inhospitable to plant life, would have been released into the world.

In October 2002, a large dust storm, apparently visible from space, and carrying millions of tonnes of soil, stretched from northern Queensland to southern NSW and spread soil east as far as New Zealand. Dust storms carry many things apart from soil: micro-organisms, pollen, seed, eggs, spores and, perhaps, a pinch of Plutonium 239. So had this Klebsiella been trialled in Australia it might have become our Christmas gift to New Zealand.

If two supposedly geographically isolated bioregions can share genetic material so easily, it seems that a ‘controlled field trial’ is more soft terminology than hard science. In 1999 the first GE Superweeds – wild turnips (Brassica rapa) – were identified in Britain, following the ‘controlled field trials’ of a GE crop of canola (Brassica napus). These two plants share a variety of insect pollinators which spread GE pollen from crop to wild plants which then inherited a gene for herbicide resistance which they in turn passed to the next generation.

Until the advent of GE, the scientific definition of a species was a life form with a unique genetic makeup that had developed to survive the environment and ecosystem within which it had evolved over time. Natural laws of inheritance ensured that a species is genetically distinct and tends to avoid hybridising with other species. The more distantly related species are the more unlikely it is that hybridisation will occur between them: so far barramundi have never crossbred with eucalypts.

Genes defining a species  were contained within its population to be inherited – vertically – down the generations, from parents to offspring. The natural world is now a laboratory where a new phenomenon – horizontal gene transfer between species, between genera, phyla and kingdoms – seems both easy and expected.

Small wonder apologists like Marohasy are spinning like mad: they need to pollute Australia with GM in order to end all precautionary State GM bans. Currently GM technology is about profit and avoiding having to pay for cleaning up your own pollution.

Every new technology has a downside that is discovered AFTER its application: atomic energy generates nuclear waste; pesticides give us bioaccumulation of poisons. With pesticides we invented the word ‘bioaccumulation’ to describe the phenomenon of pesticide residues and pesticide breakdown products accumulating towards the top of the food chain.

So here’s a new term for the movement of pollution from GE – ‘biodispersal’ – for the new phenomenon of modified genes weaving their way unpredictably across the laws of natural inheritance and widely dispersing themselves throughout the web of life on Earth.

I’m all for improving our knowledge on genetics, that is genuine, ethical, hard science. But GM technology is inherently unsafe and unnecessary and we urgently need laws to compel GM business to pay for cleaning up their pollution”. 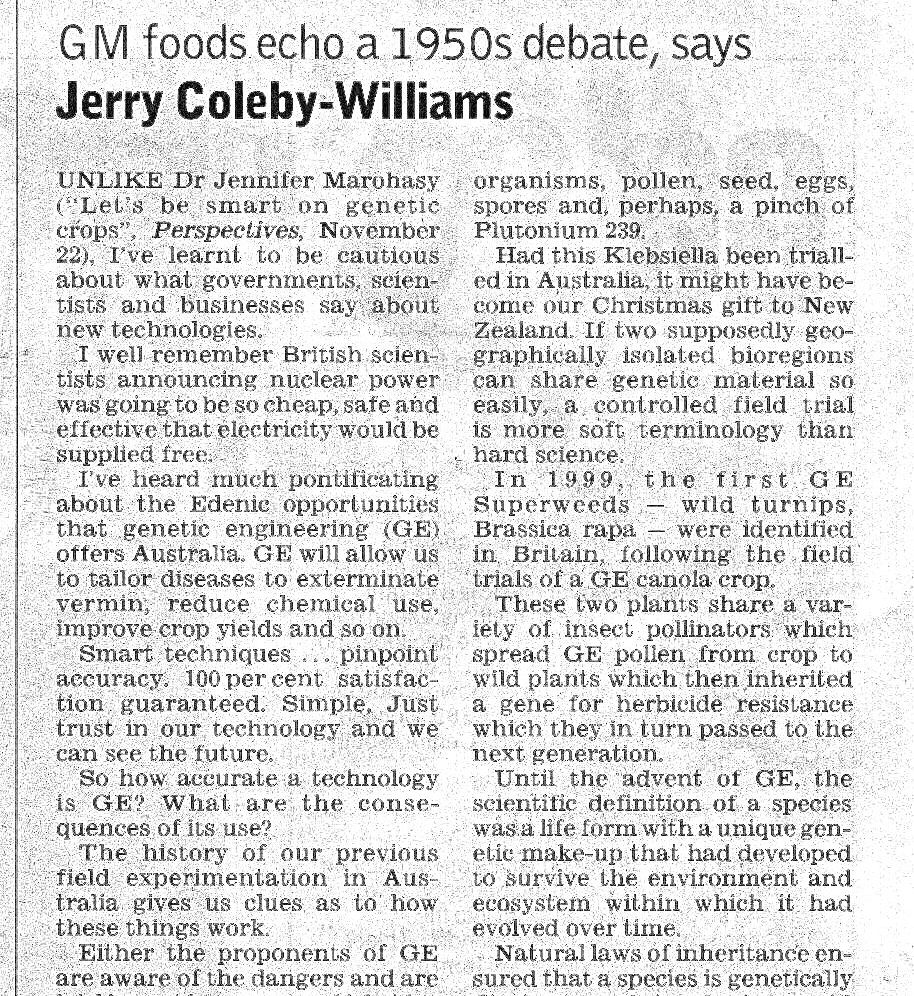 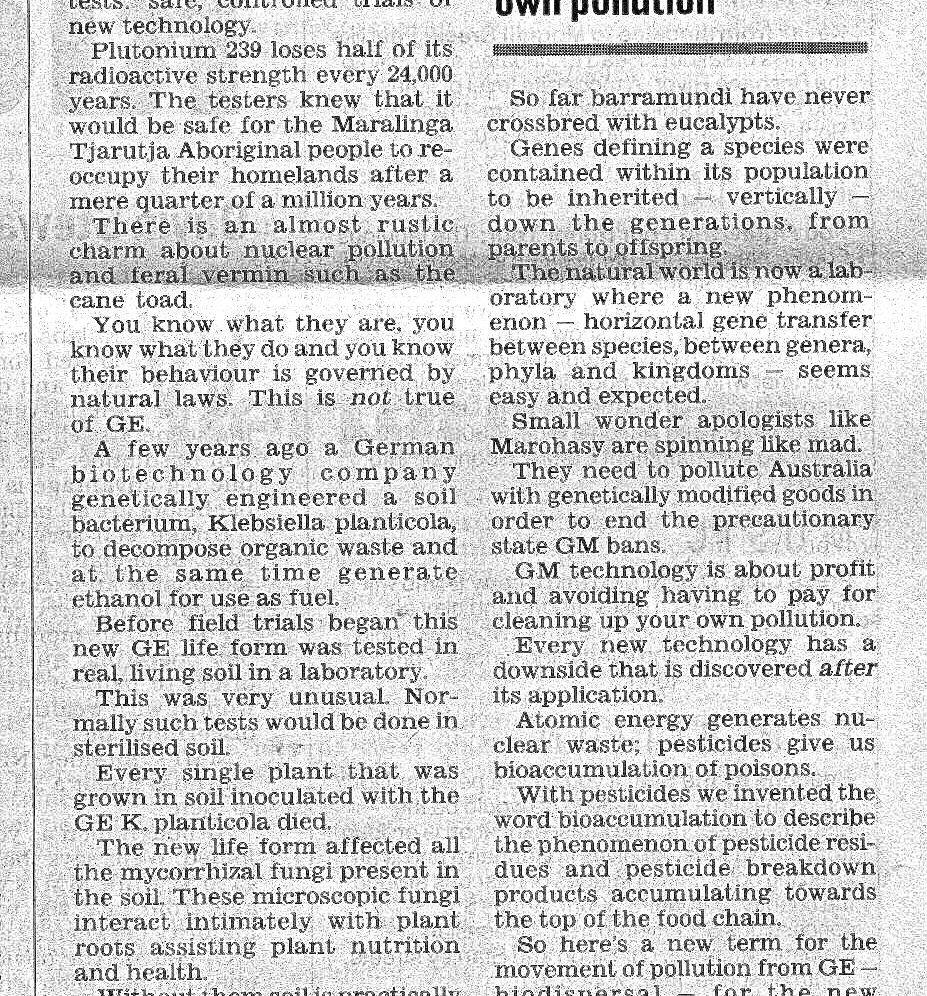 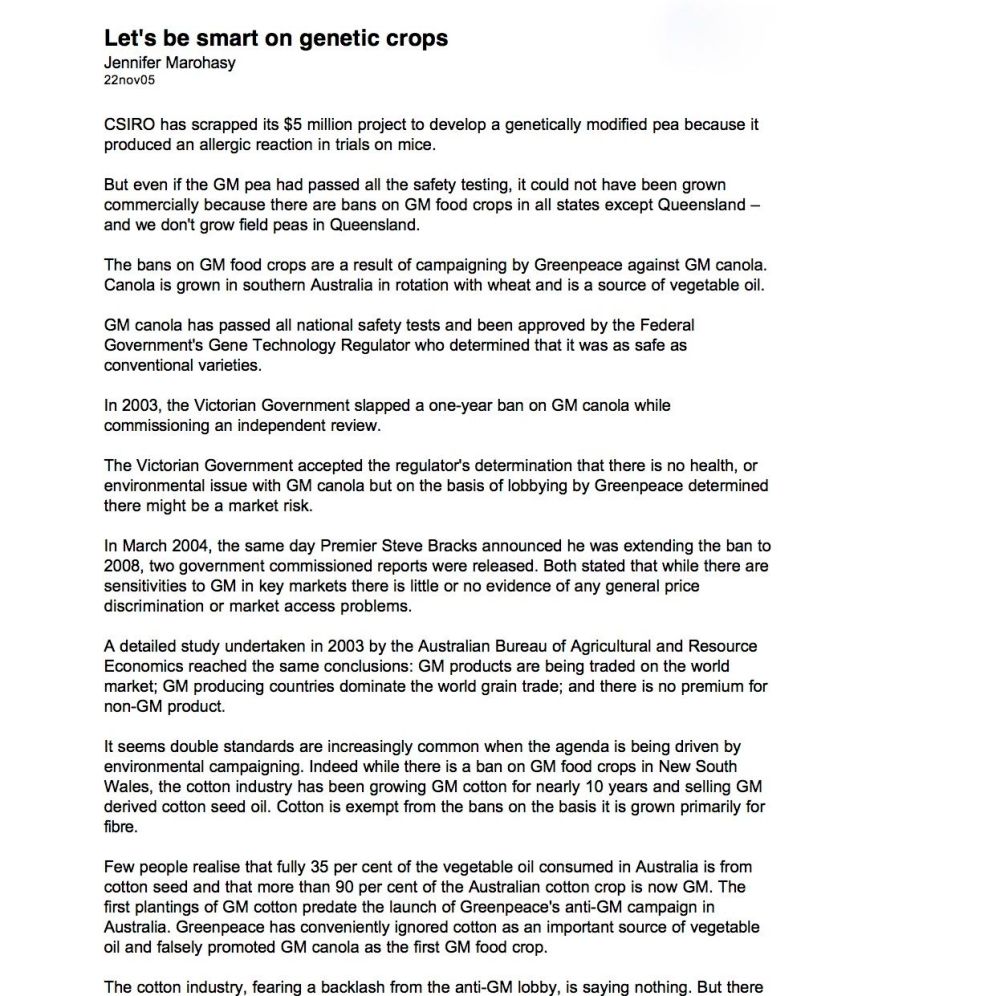 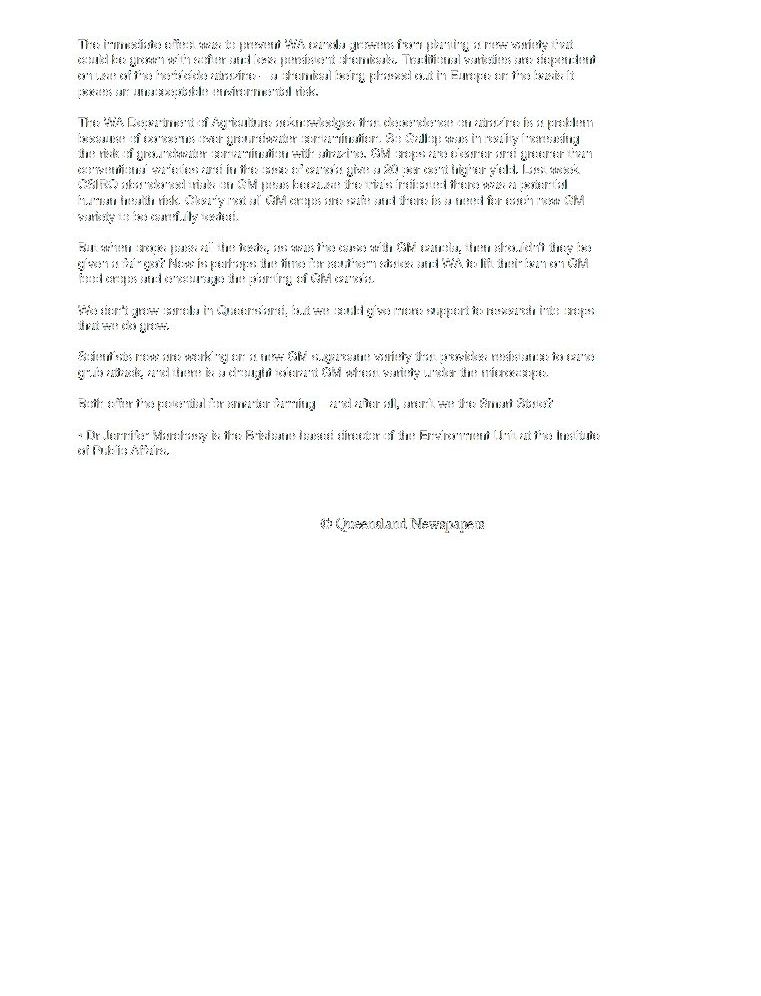 Gabrielle LG. “Great article, Jerry. To me the scariest thing about GM is the unknowable and very rapid genetic instability of the resulting ‘organisms’ and the crazy uncontrollable way that those organisms are created.

Consumers also need to understand the converse dangers and problems of not using GM but then insisting on a continuous supply of a small variety of ever more disease susceptible fruit and veggie varieties that require ever more chemical sprays to make farming them financially viable.

And not all farmers are energetic or motivated enough to farm organically. Ultimately, people are just going to have to get used to spots and holes on their veggies and enjoy the multitude of produce varieties rather than insisting on having a Pink Lady apple over some new good variety of pippin. So I’m glad to read your well written article.

A point on the dust storms, I was recently at Jenolan Caves where large and deep gradual long-term deposits of red dust can be found built up in some areas of the caves. Analysis has shown it to be the same dust that blows in on those regular September dust storms, not local soil but from way out west.

These deposits that extend deep into the caves are evidence that the dust storms have been happening for a very long time, but also, in line with your comments, they are no insignificant event; they really do deposit large amounts of red-centre particles all over the East Coast.

Also, Strontium 90 from the Woomera and Maralinga tests has also been monitored in sheep thyroids in Qld, NSW, and Eastern Vic. Strontium 90 can behave similarly to calcium and ends up in our bones and breast milk, so given the dust storms ensured it blew over East coast dairy pasture and the baby boomers had a government funded free school lunch milk program running at the time, it had a great chance of entering into the Australian population.

There’s a lot more research that needs to be done, and a lot more education on the issues too”.